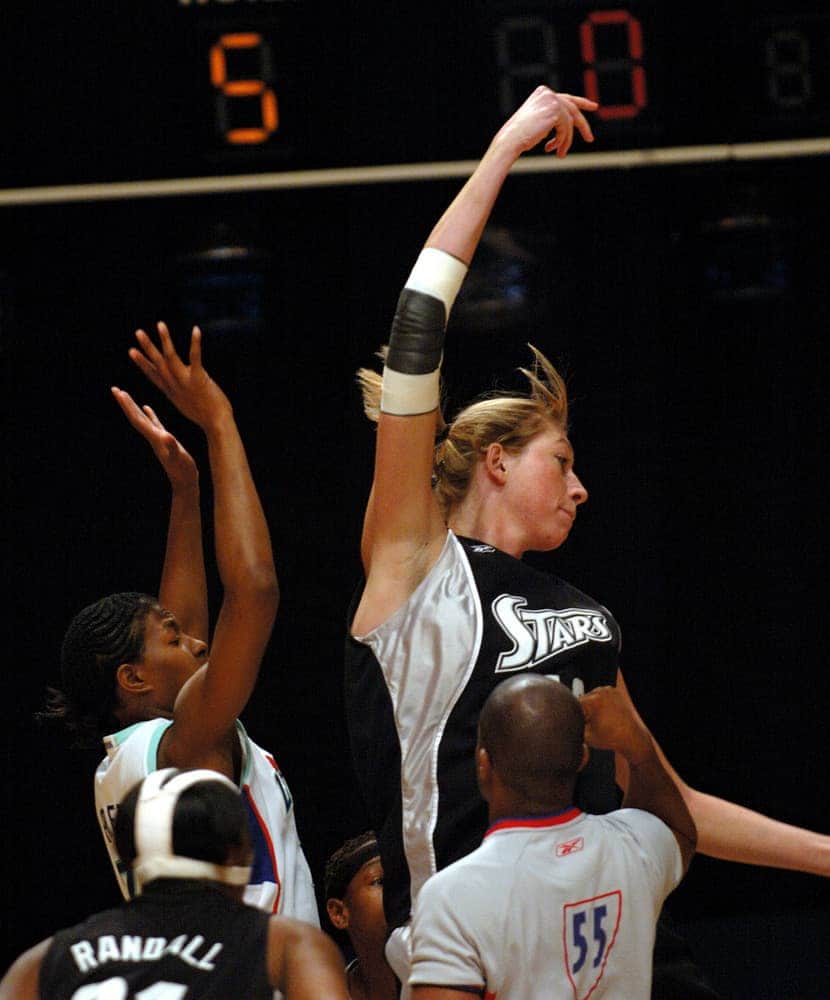 Over the years, the most popular game on earth-basketball has featured men and women with unique characteristics. Other than skill and talent, height is one striking feature that has fueled those players to the world of fame and thereby enjoying a long promising and fruitful career.

In men’s NBA, Gheorghe Muresan and Manute Bol are listed as the tallest players ever in NBA history with a shocking height of 7 feet 7 inches each. While this has left many wondering, it is amazing to learn of the tallest women in WNBA.

Who is the Tallest Player in the WNBA History?

Well, perhaps you might have heard of the tallest woman in the WNBA history. But just in case you haven’t, this article will answer you.

So, who Is The Tallest WNBA Player? The tallest WNBA player ever in history was Margo Dydek. At an alarming height of 7 feet 2 inches (2.18m), she towered high above all players who had graced the game. This has made her the tallest female basketball player ever.

As a matter of fact, she was 2 feet longer than Shannon Bobbitt, who is the shortest woman in the WNBA.

This made her the best pick for Colorado Xplosion. Her sister, Marta who is 12 years younger, is at an amazing height of 6 feet 6 inches (1.98m).

She was also a basketball star playing for the University of Texas-El Paso and later in Spain in 2000s.

Dydek was the best pick for Utah Starzz in the 1998 WNBA draft. Later on 16th April 2005, she captured the attention of Connecticut Sun.

The San Antonio Silver Stars had no choice except to exchange her for Katie Feenstra, a Liberty University star.

She was the best choice for Olympia Poznan playing from 199 to 1994. Not after long, she played for Valenciennes Orchies, a French team from 1996 to 1998.

Dydek attained the title of the most valuable player during the Polish league finals of 1999-2000 season. This was after she remarkably garnered 18.5 points and 10.7 rebounds for Gdynia in the heated FIBA Euro league.

Sources have it that Dydek clinched the title of the sportswoman of the year. She helped her team Poland WNBA win the EuroBasket women 1999.

Margo Dydek was married to a loving husband, David Twigg. Their marriage was blessed with two sons: David who was born in 2008 and Alex, born in 2010.

During her fruitful and popular career, Dydek was able to hold several unique records;

What is Her Weight and Foot size?

The famous WNBA star’s height has triggered many uncommon questions from people such as her weight, hand and foot size. Margo, who is the tallest woman in WNBA, weighs 101 kg which is above the average weight of women in WNBA.

Margo had exceptionally tall feet. She is confirmed to have worn an unusual shoe wear for women. She wore US men’s shoe size 18.

Well, this meant that she would occasionally be forced to order custom-made shoes. Her shoe-size was not common.

Who is the Tallest WNBA Player Right Now?

Many quora are debating this question? Sources say that Brittney Griner holds this title with an astonishing height of 6 feet 9 inch.

The WNBA star who plays for Phoenix Mercury automatically claimed the title after the tragic death of the tallest WNBA giant- Malgorzata Dydek on 27th may 2011. The other tallest basketball giant – Zheng Haixia – became inactive from the game after she retired.

Among the numerous women who have attained great popularity and fame in WNBA, just a few came to the limelight due to their extraordinary height.

Dydek, a 37-year-old polish born WNBA star was born on April 28th, 1974. At an incredible height of 7 feet 2 inches, she was the tallest woman in WNBA.

She answers the question commonly asked regarding the tallest WNBA player. She notably began her popular career in Poland with a polish team, Poznan Olimpia between 1994-1994.

Margo subsequently got an opportunity to play for different Polish, French and Spanish teams shortly before moving to the U.S. She earned herself great popularity in the 2000 Sydney games. In 1999, Margo was named MVP of the polish heated league finals.

Zheng, a Chinese retired basketball star comes second in this list. The 51-year-old popular star was born on March 7, 1967.

Zheng went the Los Angeles Sparks team in 1997 shortly after retiring from her national WNBA team in China. In 1998, she went back to China and got the opportunity to train the PLA women’s team.

She won the Kim Perrot Sportsmanship award. Some records she has held in her fruitful basketball career include;

In six games, she was ranked number four on the sparks in rebounds (4.3) and number five in scoring (7.5)

She scooped one of the most competitive awards, 1997 WNBA sportsmanship award. With a unique and incredible ability to shoot 618 from the field, she was the most outstanding female player in the season.

Elizabeth is a professional basketball star born on 18th August 1991 in Australia. She was born to a Nigerian father and Australian mother. The 27-year-old was the best pick for Dallas wings of the WNBA as well as the Australian Opals.

However, she had to move to Australia with her mother shortly after her parents separated. She first settled in Coffs Harbor, New South Wales before the family moved to Melbourne when she was 10 years old.

At 6 feet 8 inches, Elizabeth comes the third tallest woman basketball player as reflected on this list.

In the 2007-2008 season, Elizabeth played for Dandenong Rangers as a junior basketball player. She was awarded a scholarship to learn at the Australian Institute of Sports in 2007.

She will also remain in the fans’ memories as she helped the National Junior team of Australia win a gold medal in the heated series of Oceania world qualification.

Another giant who propels this talk of the tallest WNBA player is Lindsay Taylor. The 37-year-old is a former American professional basketball star.

She was born on May 20, 1981 to Catherine and Bill Taylor. At an incredible height of 6 feet 8 inches, Lindsay had a fulfilling career since she was 15 years old.

Taylor was a hot cake for the 2004 WNBA draft.  She won the attention of Houston Comets who chose her to play for them at age 22.

Lindsay won a silver medal in the 2003 heated Pan American Games. She earned herself a title of the best player in that game attaining six points and four rebounds.

Maria is a Russian professional basketball star. She does not have that height of the tallest WNBA player, but 6 feet 8 inches cannot be taken lightly for a female. The 39-year-old was born on February 23, 1979. In the WNBA, she played for Phoenix Mercury.

Born on October 18, 1990, Brittney is a popular American professional basketball star. The 28-year-old star currently is the best pick for Phoenix Mercury.

She wears size 19 shoes and has her arms span to 88 in (2.2 m). In her popular basketball career, Britney came with several honors.

Katharen is a retired basketball star. She is also a renowned American college basketball coach. The 36-year-old was born on November 17, 1982.

Mattera ’s exceptional height of 6 feet 7.5 inch makes her one of the tallest players in the history of WNBA. During the 2005 WNBA draft, she was the perfect pick for Connecticut sun. She was later taken by San Antonio silver stars.

She is a retired American basketball star and also a collegiate. Kara earned herself the name “Big Girl” due to her extraordinary height spanning to 6 feet 8 inches (2.01m). The 43-year-old stands the tallest player in the University of Connecticut WNBA history.

Wolters played for University of Connecticut basketball team from 1993 to 1997.

In the USA World championship competitors for blocked shots (11), she was ranked second.

Born on May 23, 1978, Minneapolis, Minnesota, Carolyn is a renown collegiate. She is also a former professional basketball star.

She became popular after winning a gold medal in the junior Olympics for the US. The 40-year-old was named to the US Women’s junior basketball team which participated in different championships in most of which they took lead.

She was born on October 6, 1985. Sylvia’s impeccably great height brought her substantial fame and popularity.

The 33-year-old is a professional basketball player. She is definitely the best pick for the Minnesota Lynx.

Who is the Tallest Female Teenager in the WNBA?

16-year-old Marvadene Anderson is the tallest girl basketball player, with an incredible height of 6 feet 11 inches.

The Jamaican teen giant, who is currently under scholarships in the US, towers high above many legends in the history of WNBA. No wonder she has earned herself the name “Bubbles “from her team-mates.

With no reasonable doubt, among all outstanding features that equip men and women players for the most popular and coveted game on earth (basketball), height is the most key.

Going back in history, those WNBA players who have had a long, fulfilling basketball career like Margo Dydek, had astonishing heights.

Notwithstanding, being the tallest basketball player in WNBA comes with its own share of challenges – injuries and wearing down fast are just some of them.